Climbing in the Cayman Islands 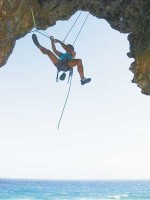 Cayman Net News Online has an article about rock climbing the limestone cliffs of Cayman Brac.

In November of 2000, a small team of people blitzed the island with new titanium bolts, developed specifically for marine environments. These should provide safe climbing for decades to come.

John Byrnes, who is part owner of Bluff View House, a small guest cottage for rock climbers on the south east coast of Cayman Brac, said there are 46 re-bolted routes of every grade at 7 areas.

All Climbing is a participant in the Amazon Services LLC Associates Program, an affiliate advertising program designed to provide a means for sites to earn advertising fees by advertising and linking to Amazon.com.